Discovery Writing and the Alpha Reader 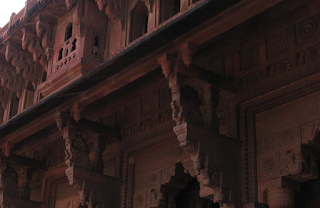 In a previous post, I discussed why the “Go! Go! Go!” approach for writers may not make the most sense for discovery writers. Discovery writers are discovering their story as they write, and I concluded that finishing a draft without revising could lead to a lot of wasted time and energy. Revising my opening chapters has definitely helped me make sure I'm heading forward on solid ground, hopefully saving me from writing a draft that I will end up throwing away.

Another important part of my process is the alpha reader, someone who reads my chapters before I complete the entire draft. Alpha readers either reassure me that my beginning is solid, or they advise me that I'm taking a wrong turn. I had two alpha readers for SKY MAHAL and they both provided me with valuable guidance that made a huge difference in how the book turned out.

If you're worried about showing people your first draft, you're not alone. I actually never show my alpha readers my first draft of anything. I tend to revise the things that most egregiously need work before asking my alpha readers to step in and give me direction. With my last novel, I can't remember how many times I revised my opening chapter. But eventually I reached an impasse, where I had no idea if what I've just written is complete garbage or not. That's when my alpha readers stepped in.

Requirements of an alpha reader:

In other words, your alphas have to be more sophisticated readers than your average beta. A beta reads a mostly polished draft and only needs to be able to tell you whether they were engaged or not, and at which parts. An alpha is much more of a partner in your story creation process, someone who can give you ideas on how to get unstuck, how to climb out of a giant plot hole, how to make your love interest more compelling, etc. At the very least, an alpha should recognize these problems and voice them before you proceed. Your alphas might be just one or two close friends, or it might be an entire critique group. The important part is that they can intervene at an early stage (hopefully without breaking your will to live!).

With SKY MAHAL, my first draft was pretty much useless. With the second(ish) draft, I gave my alphas 3-5 chapters at a time. I revised those chunks myself before handing them over, so there weren't serious flaws that I knew I had to change. I found that my two alpha readers pointed out vastly different things. One was very concerned about character interactions and making my main character likeable. The other pointed out when I was losing suspense or giving away too many of my villain's motives. Both were completely awesome and saved me from wasting time.

The best case scenario is that your alpha readers tell you you're basically on the right track. Fantastic! You can go forward with some confidence. Otherwise, you revise. And that can be frustrating if you're sick of a chapter that isn't working. Occasionally, my alphas would have so many issues with a chapter, I would have to rewrite it, show it to them, and then rewrite it again. It was slow in the first 1/3 of my manuscript, but I ended up being able to write the remaining 2/3 much faster as a result. I had large sections that hardly needed any revising at all. Thank you alphas!

So tell me, do you use alphas? Or do you guard your early drafts tightly?
at 8:48 AM