Showing posts from July, 2013
Show all

Hello everyone!  This week I'm interviewing Peggy Eddleman, whose MG debut Sky Jumpers will be released on Sept 24 by Random House Books for Younger Readers!  I first encountered Peggy's success story when she appeared as a guest in Brandon Sanderson's 2012 lecture series (yes, I've raved about those often).  Peggy's savvy querying advice really helped me a lot in my own search for an agent, so I definitely owe her one! Here's the dish on her fabulous sounding novel and her writing journey.

Hi Peggy! Congrats on the upcoming release of SKY JUMPERS! What's the genre and one-sentence pitch?

Thanks so much, Maya! It’s a middle grade adventure about a girl living in a post-apocalyptic town where she can’t do the most important thing— invent, but when bandits invade, inventing won’t save them, but the daring and risk-taking that usually gets her into trouble just might.

The setting. My family and I were flying home from Disney World on a c…
Read more

Hello everyone! I'm delighted to continue our success story interviews with Krista Van Dolzer, MG author.  Her amazing blog is a must for aspiring writers: full of agent interviews, pitch opportunities, and more.  When I heard that Krista's novel THE REGENERATED MAN sold, I was so thrilled because she's done so much for the writing community, and also because it sounds awesome. Here's the scoop on her novel, her blog, and her writing journey!

Congrats on your recent sale of THE REGENERATED MAN to G.P. Putnam's Sons Books for Young Readers! What's the genre and one-sentence pitch?

THE REGENERATED MAN is an MG historical with a dash of science fiction. As for a one-sentence pitch ... I never wrote one of those:) So I'll just refer you to the summary on my blog if you want to know more.

How did you get the idea to write about a regenerated Japanese WWII veteran?

The first line came to me as I was falling asleep one night: "Mama said it was plum foolishness t…
Read more 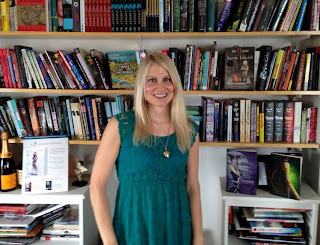 Hi everyone! I've got a special treat for you: an interview with a fabulous agent, Katelyn Detweiler at Jill Grinberg Literary!  Find out what she's looking for, which authors excite her, and how best to catch her attention!

Hello, Katelyn! Thanks so much for taking time out from agenting for this interview! What was your background prior to joining Jill Grinberg Literary Management?

I was an English major in college, emphasis in creative writing, and had the vague notion from the end of freshmen year or so on that I wanted (needed, really, since no other career seemed fathomable to me) to be in publishing – though “publishing” to me at that time meant being an editor, because it was hard to really have a sense of the opportunities and roles much beyond that.

I worked as an intern at Penn State University Press for two years, and then moved to New York City a few weeks after graduation for the Columbia Publishing Course, a fairly intensive 6 week program that throws you into th…
Read more 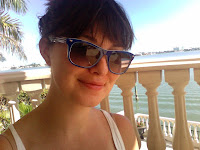 (Update: SPIN has been renamed to THE WRONG SIDE OF RIGHT)


Hi Jenn! Thanks so much for the interview. I'd love to hear more about your debut novel, SPIN! What's the genre and one-sentence pitch?

Thank you, Maya! SPIN is a YA Contemporary novel that deals with the fallout after a sixteen year old girl learns along with the rest of the country that the Republican nominee for President is her father.

Well, we had a whole lot of political sex scandals in a row for a while there, didn't we? John Edwards, Mark Sanford, Anthony Weiner. But when the Schwarzenegger story broke, it seemed different. He had a child, old enough to really be impacted by the media attention and the scandal surrounding him. That got my "What If"s whirring: what if it were a girl, and what if she wanted the chance to get to know him, to be a real part of h…
Read more
More posts