- September 26, 2019
It's Banned Books Week, where we celebrate freedom of information and books that have been banned by libraries, schools, etc. in an effort to suppress ideas and identities.

Since it's 2019 and we're living in divided times, I just feel that I need to point out that I feel strongly that schools, libraries, and society itself should not tolerate hate speech or books that perpetuate hate speech, nor should they give white supremacists a platform in any way. The celebration of Banned Books is meant to uplift everyone, especially the marginalized. It should not be twisted to mean that those who want to dominate society should be given more of a platform than they already have. 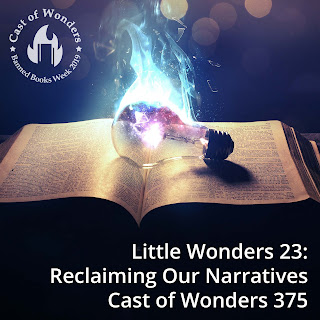 Historically, books have not been banned because of hate. They've been banned to suppress marginalized identities, ideas that critique governments, or speak to uncomfortable subjects such as sexual assault or even positive stories about sex. Those stories need to be told, because they are truth and because they represent real people, and they are meant to give everyone an equal footing. THOSE are the stories we are celebrating this week.

So with that in mind, I'm thrilled to share that my flash fic story "Weeds" is live on the Cast of Wonders podcast this week. It is included in a bundle of three flash stories of hope and resistance, in episode 375. I was thrilled to be featured in the company of amazing authors Joyce Chng and Innocent Chizaram Ilo.

"Weeds" is a prequel to my short story "Princess" which appeared in issue 03 of Foreshadow: A Serial YA Anthology. Together, they represent a mother/daughter duo with wildly divergent relationships to technology.

Get ready for subtle censorship, inherent biases, rogue algorithms, and making love in the garden between the cilantro and the sweet bay!

Many thanks to rockstar editor Julia Rios, the team at Cast of Wonders for a fantastic production, and the teen writer who narrated my story, Athena Haq.